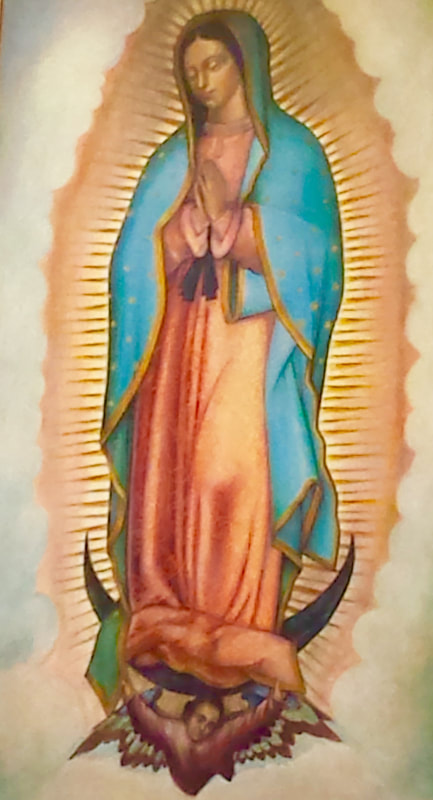 Science Sees What Mary Saw From Juan Diego's TilmaDigital technology is giving new leads for understanding a phenomenon that continues to puzzle science: the mysterious eyes of the image of Our Lady of Guadalupe.


The image, imprinted on the tilma of a l6th-century peasant, led millions of indigenous Indians in Mexico to convert to the Catholic faith. Earlier this month in Rome, results of research into the famed image were discussed by engineer José Aste Tonsmann of the Mexican Center of Guadalupan Studies during a conference at Pontifical Regina Apostolorum Athenaeum.

For over 20 years, this graduate in environmental systems engineering at Cornell University has studied the image of the Virgin left on the rough maguey-fiber fabric of Juan Diego's tilma. What intrigued Tonsmann most were the eyes of the Virgin.

Though the dimensions are microscopic, the iris and the pupils of the image's eyes have imprinted on them a highly detailed picture of at least 13 people, Tonsmann said. The same people are present in both the left and right eyes, in different proportions, as would happen when human eyes reflect the objects before them.


Tonsmann said he believes the reflection transmitted by the eyes of the Virgin of Guadalupe is the scene on Dec. 9, 1531, during which Juan Diego showed his tilma, with the image, to Bishop Juan de Zumárraga and others present in the room.

In his research, Tonsmann used a digital process used by satellites and space probes in transmitting visual information.

He insisted that the basic image "has not been painted by human hand." As early as the 18th century, scientists showed that it was impossible to paint such an image in a fabric of that texture. The "ayate" fibers used by the Indians, in fact, deteriorate after 20 years. Yet, the image and the fabric on which it is imprinted have lasted almost 470 years.

Tonsmann pointed out that Richard Kuhn, the 1938 Nobel Prize winner in chemistry, found that the image did not have natural animal or mineral colorings. Given that there were no synthetic colorings in 1531, the image is inexplicable.

In 1979, Americans Philip Callahan and Jody B. Smith studied the image with infrared rays and discovered to their surprise that there was no trace of paint and that the fabric had not been treated with any kind of technique.

"[How] it is possible to explain this image and its consistency ... on a fabric that has not been treated?" Tonsmann asked. "[How] is it possible that, despite the fact there is no paint, the colors maintain their luminosity and brilliance?"

Tonsmann, a Peruvian engineer, added, "Callahan and Smith showed how the image changes in color slightly according to the angle of viewing, a phenomenon that is known by the word iridescence, a technique that cannot be reproduced with human hands."

The scientist began his study in 1979. He magnified the iris of the Virgin's eyes 2,500 times and, through mathematical and optical procedures, was able to identify all the people imprinted in the eyes.

The eyes reflect the witnesses of the Guadalupan miracle the moment Juan Diego unfurled his tilma before the bishop, according to Tonsmann.

In the eyes, Tonsmann believes, it is possible to discern a seated Indian, who is looking up to the heavens; the profile of a balding, elderly man with a white beard, much like the portrait of Bishop Zumárraga painted by Miguel Cabrera to depict the miracle; and a younger man, in all probability interpreter Juan González.

Also present is an Indian, likely Juan Diego, of striking features with a beard and mustache, who unfolds his own tilma before the bishop; a woman of dark complexion, possibly a Negro slave who was in the bishop's service; and a man with Spanish features who looks on pensively, stroking his beard with his hand.

In summary, the Virgin's eyes bear a kind of instant picture of what occurred at the moment the image was unveiled in front of the bishop, Tonsmann says.

Moreover, in the center of the pupils, on a much more reduced scale, another scene can be perceived, independent of the first, the scientist contends. It is that of an Indian family made up of a woman, a man and several children. In the right eye, other people who are standing appear behind the woman.

Tonsmann ventured an explanation for this second image in the Virgin's eyes. He believes it is a message kept hidden until modern technology was able to discover it just when it is needed.

"This could be the case of the picture of the family in the center of the Virgin's eye," the scientist said, "at a time when the family is under serious attack in our modern world." (Zenit)

This news analysis was provided by Zenit.

ZENIT is an International News Agency based in Rome whose mission is to provide objective and professional coverage of events, documents and issues emanating from or concerning the Catholic Church for a worldwide audience, especially the media.

The AuthorCopyright © 2001 Zenit
franciscanfriars
Published on Dec 16, 2006
Homily on Our Lady, Queen of the Seraphic Order, given by Fr. Angelo Mary Geiger on Dec 15th 2006, at Our Lady of Guadalupe Chapel, Griswold, CT.